JAPAN - The continuing horror of Taiji continues to expose the astounding arrogance of the Japanese government, Japanese media and the Japanese people

The hot blood flows thick,
Millions of eyes remain blind
Ignorance is bliss
-pw
Town without pity,
Taiji is an evil place,
Japan embraces.
-pw
These are the words of Paul Watson:
The Japanese government defies the international community including the International Court of Justice, and has resumed killing hundreds of whales per year for ‘scientific purposes’, although there is no scientific support for this venture.
In 2009, a documentary called “The Cove” was released and many thought that this would certainly bring an end to the horrible events that take place every year. Nothing has succeeded in curbing the violence and destruction and thousands have perished since that time.

Right now, as you read this, there are freshly captured wild dolphins in pens in Taiji that deserve to be released.
These dolphins are being force fed and will soon be shipped thousands of miles from their homes in dark wooden boxes to every corner of the earth to live a life in a tiny concrete tank. Each day, for 6 months per year, 12 boats leave Taiji harbor hunting to destroy entire families.

They must love their job of killing poor and innocent creatures since not even a day after they killed a lot of animals , they went looking for more.
Even in the SOUTHERN WHALE SANTUARY , a place where whales are supposed to be safe , they are Killed every year by the Japanese .
In a similar vein, the Japanese government defies the international community including the International Court of Justice, and has resumed killing hundreds of whales per year for ‘scientific purposes’ (although there is no scientific support for this venture).
THIS HAS TO BE THE WORST EXCUSE EVER.
Ever heard of “Traditions change”?
Why not change this tradition for the sake of our animals and also the Japanese Public!

STOP THIS ONCE AND FOR ALL! We are humans, we are not supposed to be this cruel to anybody or any species!

Sincerely:
Also note that I fully subscribe the words of Paul Watson :

Restricted from inference, the Cove Guardians are engaged in live-streaming, photos and video in an effort to keep this brutality before the eyes of the world. Just today the capture and killing of a pod of over 300 dolphins reached the eyes of over ten million people around the planet, everywhere except in Japan where social media and mainstream media is censored.
Being willfully ignorant of the horror of Taiji is not an excuse. The screams of the dolphins are echoing around the globe, these bloody scenes of sadistic brutality are being viewed around the world by millions.

This mercilessly callous annihilation of such gentle beings is an abomination that is staining the escutcheon of Japan with a putrid and enduring shame. The entire nation of Japan reeks of a sordid barbarous ignominy, and it is all the fault of a mere thirty or so thuggish Japanese fishermen engaged in a vile trade of enslavement and mass murder.
They have given Taiji the distinction of being the world’s most notoriously pitiless town.
There is nothing in Japanese culture that can justify this atrociously vile evil. And that is what it is, pure malicious, odorous evil.
These dolphins are thinking, feeling self-aware beings with a complex language and social networks. This killing is cold blooded murder. There can be no acceptable excuse.

This is not right. It is not a tradition and even if it was, damn such a foul tradition. This is unconscionable, unforgivable and displays a deep and odorous malfeasance that is universally unacceptable outside of Japan and the Danish Faroe Islands.

They cannot continue to hide behind the skirts of accusations of racism. Compassion for the lives of dolphins is not racism. As for their so called ‘food culture’ I have no respect for it at all, it is no different than asking me to have respect for the food culture of cannibals or the perversion of spooning out the brains of live twitching monkeys.
I am no longer interested in listening to the pathetic justifications for this foul and vile atrocity. 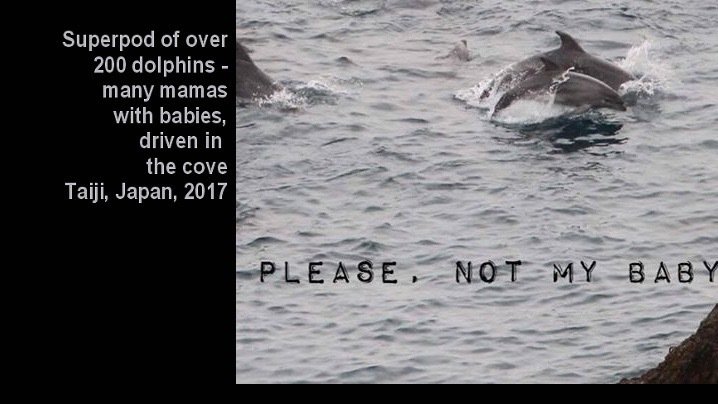